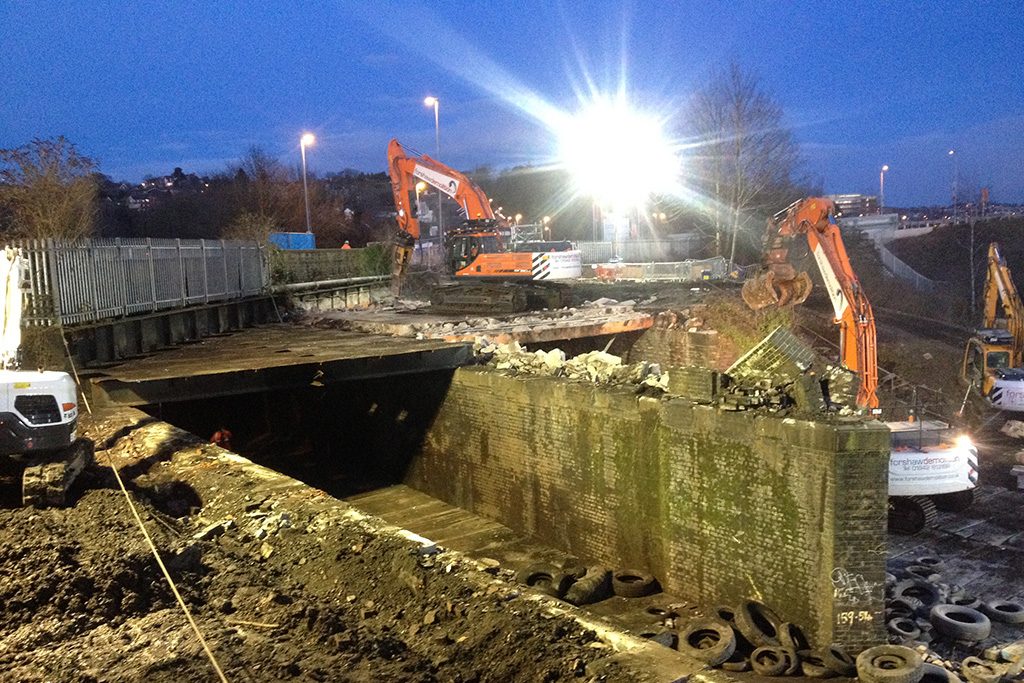 The bridge carried a former road over the main South Wales railway line and was due for demolition as part of the electrification of the line. It was approximately 20m wide and ran diagonally across the 4-line railway beneath. Forshaw’s were given the Christmas period (23:00 Christmas Eve to 06:00 27th December) to remove the bridge and return the line to Network Rail so a great deal of planning was required to achieve this.

In the weeks prior to Christmas we were allowed occasional access to the railway during temporary overnight “possessions”, controlled by Network Rail. This allowed us to take detailed measurements of the bridge and its relationship with the railway, embankment and other surrounding landmarks. Furthermore, we were able to remove the top layers of the bridge (soil, tarmac, stones, etc.) during these overnight possessions and according to design calculations carried out by our structural engineer to ensure the integrity of the bridge was not compromised. Plant & equipment, stores, supplies and other materials were delivered to the bridge in the days leading up to Christmas to enable the team to complete the demolition while everybody else was enjoying their Christmas lunch.

As soon as the railway was closed on Christmas Eve, protection was placed over the railway lines consisting of geotextile, polystyrene blocks, further geotextile and heavy duty navvy matts.  Demolition excavators were then positioned to reduce the bridge structure and load the spoil into waiting wagons.  Once the structure was demolished and the material removed, the protective layers were taken away and the railway cleaned up and handed back to Network Rail a full 10 hours ahead of the anticipated deadline.