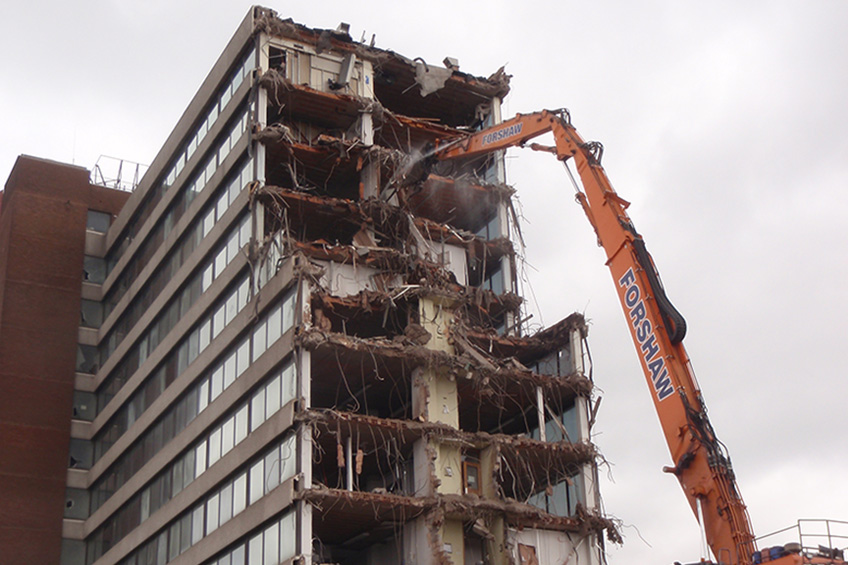 This contract involved the demolition of the former headquarters of the Greater Manchester Police. The building was adjacent to the Greater Manchester 999 call centre which was to remain live throughout the process. An overhead link bridge connected the two buildings and the 999 building also contained expensive IT equipment that was sensitive to vibration.

The building was soft-stripped entirely from top to bottom to prepare it for demolition. The roof underground car park, which extended beyond the footprint of the tower block, was broken out and a layer or crushed material placed around the building to form a protective cushion. This cushion was built up under the link bridge to just below its base to enable it to be demolished mechanically. The tower block was demolished mechanically using our Hitachi EX670 demolition excavator fitted with hydraulic combination shears.

Due to the sensitive nature of the site we set up two vibration monitors, two noise monitors and four dust monitors around the site at strategic locations to monitor our impact on our neighbours and to ensure our activities were within agreed limits.  Reports were submitted to the Principal Contactor and client weekly.  The project was carried out successfully and on time with no complaints from our sensitive neighbours.

“On the NW Hub Chester House Deconstruction Project, Balfour Beatty have ensured that their partnered demolition contractor Forshaw, have met the framework requirements, including active participation in Heads Up Workshops, regular risk workshops and planning workshops. Balfour Beatty and Forshaw have brought a joint approach to daily liaison with the adjacent live 999 Call centre and public, and have actively participated in monthly client meetings.” – Mark Hilton, Director, WYG