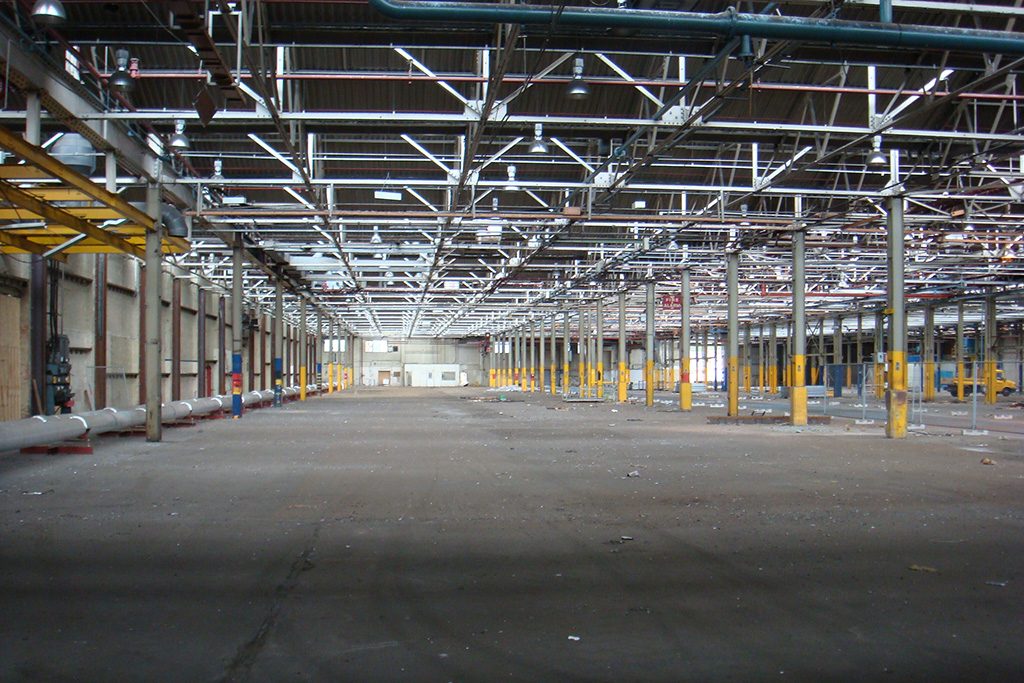 This contract involved the demolition of the former Peugeot Car manufacturing facility in Coventry.  The site area covered more than 72 acres with 130,000m2 of buildings and 90,000m2 of additional external hard-standings.  The contract was split into three phases to permit land to be handed back in a planned manner due to there being three separate end users of the land.

Phase 1 was originally a 20-week programme, however, due to client requirements, we had to complete asbestos removal, decontamination of above and underground storage tanks, demolition of all buildings, site clearance, grubbing up of slabs and all foundations and crushing to an agreed specification within a much reduced 9-week period. Thorough and careful planning was therefore required.

We fast-tracked the project and resourced the site with upwards of 20 demolition excavators of various sizes, 50 operatives across all disciplines and 2 site managers. As a result of this concentrated effort, phase 1 was completed in 7 weeks, including significantly more foundations than first envisaged. During this period, we processed over 3,500 tonnes of scrap metal, recycled 500 tonnes of waste and crushed and stockpiled 140,000 tonnes of brick & concrete. At the time, the project was believed to be the largest single house building site under way in the UK.

To monitor our impact on the environment and help keep it to a minimum, we recorded our noise levels and vibration levels at various locations around the site throughout the project.  We also ensured that dust was kept to an absolute minimum by suppressing all work-faces with water.  The demolition activities returned a Demolition Recovery Index of over 99% due to the vast majority of materials being either brick and concrete hardcore, which was crushed to 6F2 material and reused on site, or scrap metal, which was removed and recycled.

Due to the high profile nature of the project, the HSE made routine inspections to site and were pleased with the levels of paperwork and systems in place and commented on a well run site. The site was also visited by the Environment Agency and the Local Authority Environmental Health Department as part of their remediation strategy with no adverse comments. Despite the much shortened timescale and other difficulties faced during the project, we completed the programme ahead of schedule, on budget and to the satisfaction of our client, who expressed their sincere appreciation for the efforts we put in. In particular, they were impressed with the attention paid to Health & Safety matters.