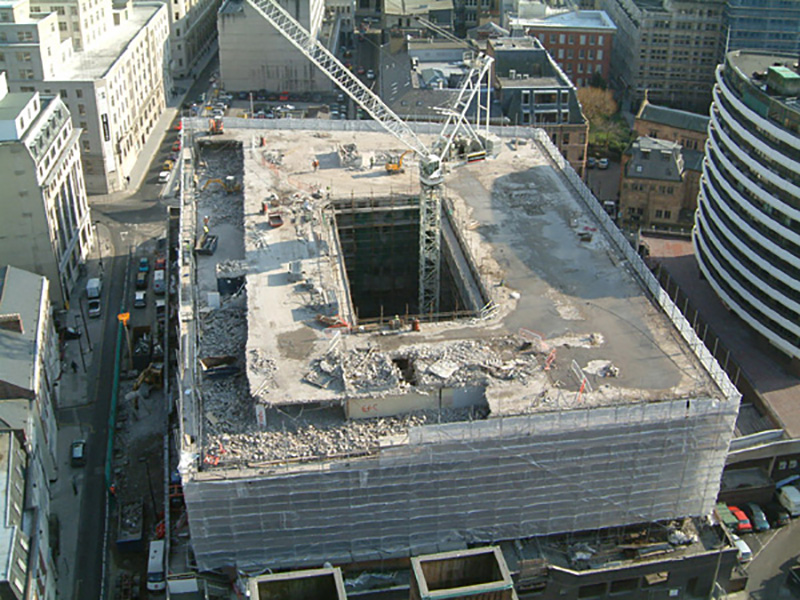 Richmond House was mostly a conventional reinforced concrete building. The office tower block wall was constructed with load bearing precast wall panel units. These carried all the load from the edge of the floor slabs. Matching precast units were used for the parapets and for the trimming edge beam cast into the floor slab above the ground floor. These precast units were all made using a special decorative concrete mix that included glass aggregate. A high proportion of the parapets and wall units were deteriorating.

The building had an internal courtyard at podium level and there was car parking levels below basement offices.

Scaffolding with monarflex sheeting was erected around the outside of the building and within the courtyard. Rather than deconstruct the whole structure by hand, we came up with the idea of forming a 20mx12m hole in the central courtyard section of the building down to the basement slab and erecting a 34m high luffing jib tower crane on the original tower crane base, used to build the structure in the 1960’s.

Deconstruction of the top two floors on 3 elevations and all six floors on the Thistle Hotel elevation was achieved using mini-excavators with through-propping to floors for additional loads. The wall panels were lifted down to the ground using the tower crane and the floors broken out onto the floor below and then deposited down the lift shafts using skid-steer loaders.

The scaffolding was then completely removed and the remaining floors were demolished using a long reach excavator fitted with a 360o rotating concrete pulverisor.

Close liaison with Liverpool City Highways Department was paramount, due to ever-changing road diversions, to ensure the public were protected at all times.

Environmental considerations were also taken into account. We sited four noise monitors and four seismographs around the site recording information daily. This ensured the neighbours were happy and would warn us early of any potential damage to the underground Mersey Tunnel structure (of which there was none!).

We held regular meetings with the neighbouring hotel and businesses to keep them informed of our activities and to allow them to raise any concerns.