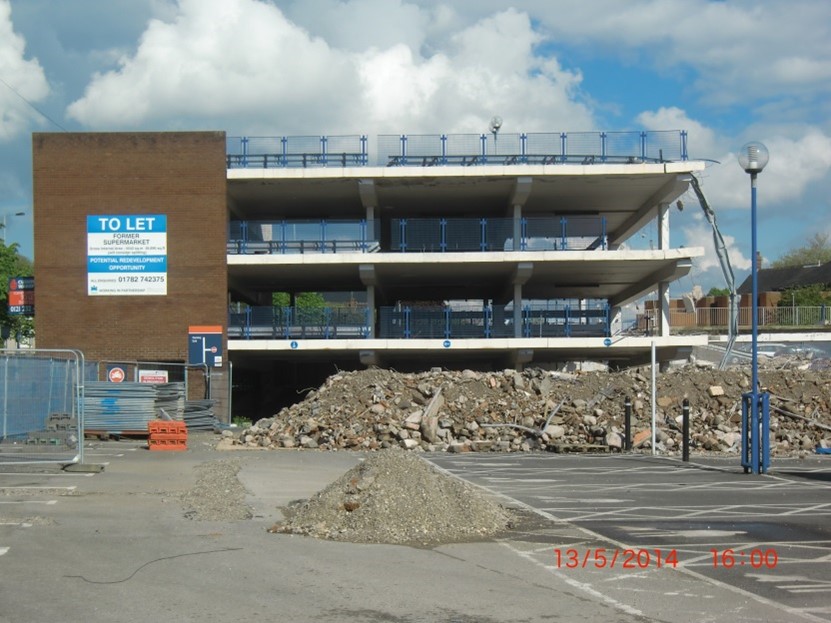 This contract involved the demolition of the former Sainsbury’s supermarket and adjacent multi-storey car park in the town centre of Newcastle-under-Lyme. The site was split into two sections – the car park being adjacent to Ryecroft, the busy A52 dual carriageway through Newcastle, and also backed onto the municipal buildings car park and Newcastle-under-Lyme Police headquarters. The supermarket footprint spanned from Liverpool Road to Corporation Street which also incorporated the entrance and exit for the very busy Police station. The A52 also housed a subway that exits into Liverpool Road which was the main pedestrian thoroughfare to the high street shopping area, markets, schools, businesses and local college. Opposite the site there was a children’s play centre and the local Magistrate courts.

The multi-storey car park had been closed for a number of years due to uncertainty about its stability. Prior to commencing works we organised a structural assessment by a structural engineer who was able to confirm that we could demolish the car park remotely using mechanical demolition excavators.

As well as the usual electricity, gas, water and telecoms services to contend with, the footpath on Corporation Street housed a fibre optic cable feeding the 999 call centre in the Police Headquarters.  Protection of these services were critical when the method statements were developed.

After careful planning and liaison with the Highways Agency, Police, and local businesses, the demolition team opted for the high reach mechanical demolition method. Temporary early morning footpath closures were introduced and over a 10-day period. Sections of the building were progressively demolished and the footpaths opened back up immediately to ensure minimum disruption to local businesses and the general public

The supermarket was soft-stripped entirely to prepare it for demolition. Once complete, we commenced the remote demolition of the supermarket and multi-storey car park using our demolition excavators fitted with hydraulic combination shears. The car park was demolished mechanically from the top floor down, working bay by bay making sure any debris was scraped off the floors below prior to moving on, to ensure the floors of the already weak car park were not overloaded. This was done up to the last two bays that were adjacent to the A52 dual carriageway during normal working hours. A night time road closure was scheduled by the local council’s highways’ department to resurface the adjacent dual carriageway so our site team met with the contractors and council to coincide and organise our works. This allowed us to continue using our mechanical excavators and demolish the structures remotely rather than using hand demolition deconstruction techniques, which adds more risk to the project. Due to this methodology, we were able to complete the demolition ahead of schedule and with minimal disruption to the town centre businesses and shoppers.