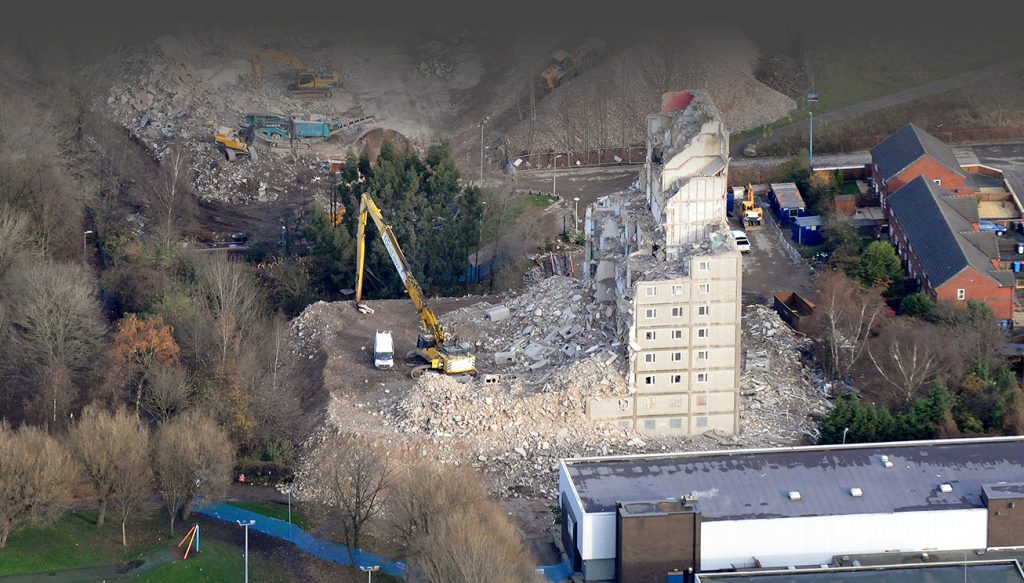 The three, seventeen storey tower blocks were of a Fran concrete panel construction with additional strengthening at the gables. One of the tower blocks had space to all sides to allow mechanical demolition, however the other two were adjacent to other structures.

The first tower block (Pear Tree Court) was soft-stripped and any asbestos containing materials removed. A two-storey ramp of crushed material was constructed to allow our high reach demolition excavator to commence mechanical demolition. The block was demolished methodically down to the lower floors where smaller demolition excavators completed the demolition and the removal of the slab and foundations.

To facilitate mechanical demolition on the other two tower blocks (Peach Tree and Apple Tree Courts), we used a mobile crane to hand a demolition curtain adjacent to the working face which would prevent debris spill. This approach was successful and allowed us demolish the blocks in a much shorter timeframe than originally planned.

The demolition material arising from the work was crushed on site and used to backfill the void left when the foundations had been removed. The whole site was finished with a layer of topsoil and grass seed and knee rail erected at strategic points around the site.